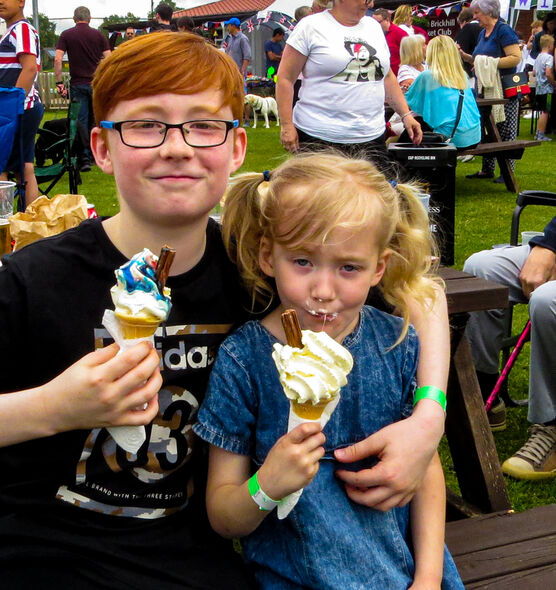 See Gallery for more. Better still come to the Social Evening on 7th July at Great Brickhill and see the full image set!
21/06/2022
Great Brickhill celebrated the Queen’s Platinum Jubilee in style on Thursday 2nd June 2022. Organised by the Parish Council and a working committee led by David Bratt BEM, the weather was good and the turnout the best the village has achieved in some years.
The day started with a semi-formal lunch for the Seniors of the village provided by the Brickhill Bistro with the accompaniment of the live televised ‘Trooping of the Colour’. The judging of flowers, cakes, jams, vegetables, pictures and much more took place in the main marquee. The abundant plant stalls did good business and the kids’ play areas with bouncy castles and games were well attended. The Little Ashes forest hut with face painting and party games was a fun place to be.
Lewis Monk, the master of ceremonies introduced James Northen our Town Cryer at 2pm for his proclamation about the evening’s ceremony. This was followed by several bands. First up were the OU Wind Band and the Heath Band who together set the tone for the afternoon’s fun. The Calzone Kitchen, Cocky Chicken, Hangry Vegan and Tennis Club BBQ provided excellent food with the GB Cricket Club bar serving lots of liquid refreshments!
The children’s fancy dress went well (everyone won first prize!) and the Dog Show was nothing short of a triumph with more dogs taking part than you could shake a very long stick at. Tea and bell ringing at St Mary’s Church brought a resounding end to the afternoon programme. But the bands played on, the bar continued to refresh us and the evening session began to take shape.
Lewis introduced the speechmakers David Bratt, Barbara Wight and Sarah Clarke, a Deputy Lieutenant for Buckinghamshire. Sara Stokes played ‘Majesty’ on the bugle, and Stephen Syfret played 'Diu Regnare' on the bagpipes. Finally the Church Benefice Choir led by Jerry Breslin sang 'A Life Filled with Grace' via a recording made earlier in St Mary's by Wayne Jimes who ran the sound systems all day.
The Beacon Lighting followed at dusk. It was lit by Sarah assisted by three generations of the Head family. Lewis let the entertainment for the remainder of a highly successful day, raising many thousands of pounds for our resident Ukrainians.
Photographs were taken throughout by David Marlow and his team Leon Hargreaves, Julie Cuthbert, Malcolm Wright and Brian Wright. This was authorised by the GB Parish Council Committee and their images are presented in these pages and elsewhere for all to enjoy.
David Marlow